Ted Anderson, a precious metals seller, was hoping to rustle up some business for his gold and silver dealership when he started a radio network out of a Minneapolis suburb a couple of decades ago. Soon after, he signed a brash young radio host named Alex Jones.

Together, they ended up shaping today’s misinformation economy.

The two built a lucrative operation out of a tangled system of niche advertisers, fund-raising drives and promotion of media subscriptions, dietary supplements and survivalist merchandise. Mr. Jones became a conspiracy theory heavyweight, while Mr. Anderson’s company, the Genesis Communications Network, thrived. Their moneymaking blueprint was reproduced by numerous other misinformation peddlers.

Mr. Jones eventually drifted from his dependence on Genesis, as he expanded beyond radio and attracted a large following online. Yet they were closely tied together again in lawsuits accusing them of fueling a bogus narrative about the 2012 shooting at Sandy Hook Elementary School.

The move freed Genesis, which says on its website that it “has established itself as the largest independently owned and operated talk radio network in the country,” from the steep penalties that most likely await Mr. Jones. But the cases, soon headed before juries to determine damages, continue to shed light on the economics that help to drive misleading and false claims across the media landscape.

The proliferation of falsehoods and misleading content, especially heading into the midterm elections this fall, is often blamed on credulous audiences and a widening partisan divide. Misinformation can also be hugely profitable, not just for the boldface names like Mr. Jones, but also for the companies that host websites, serve ads or syndicate content in the background.

“Misinformation exists for ideological reasons, but there is always a link to very commercial interests — they always find each other,” said Hilde Van den Bulck, a Drexel University media professor who has studied Mr. Jones. “It’s a little world full of networks of people who find ways to help each other out.”

Mr. Jones and Mr. Anderson did not respond to requests for comment for this article.

Alex Jones and his doom-and-gloom worldview fit neatly into the equation.

Genesis began syndicating Mr. Jones around the time he was fired by an Austin station in 1999, the host said this year on Infowars, a website he operates. It was a complementary, if sometimes jarring partnership — “sort of a marriage made in hell,” Ms. Van den Bulck said. 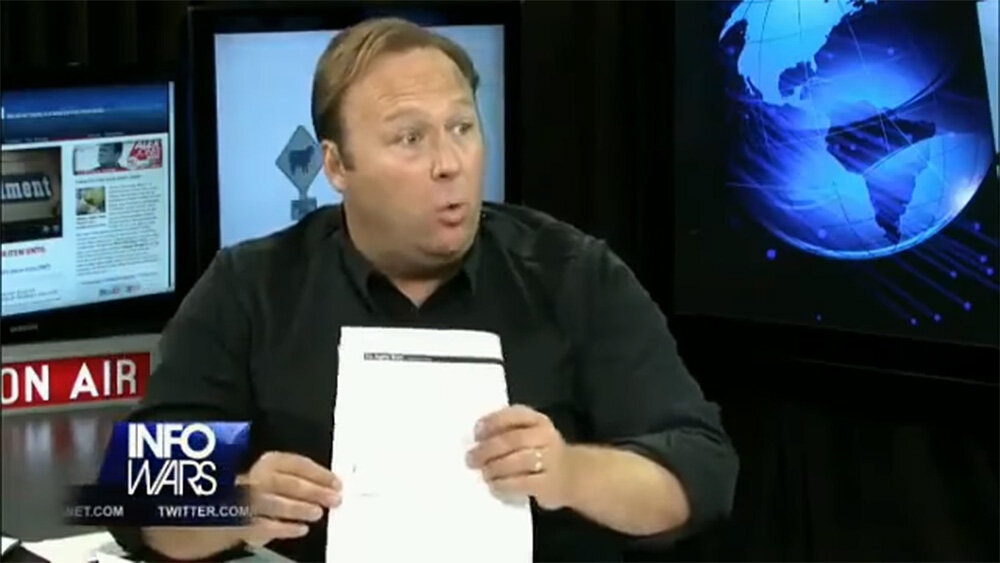 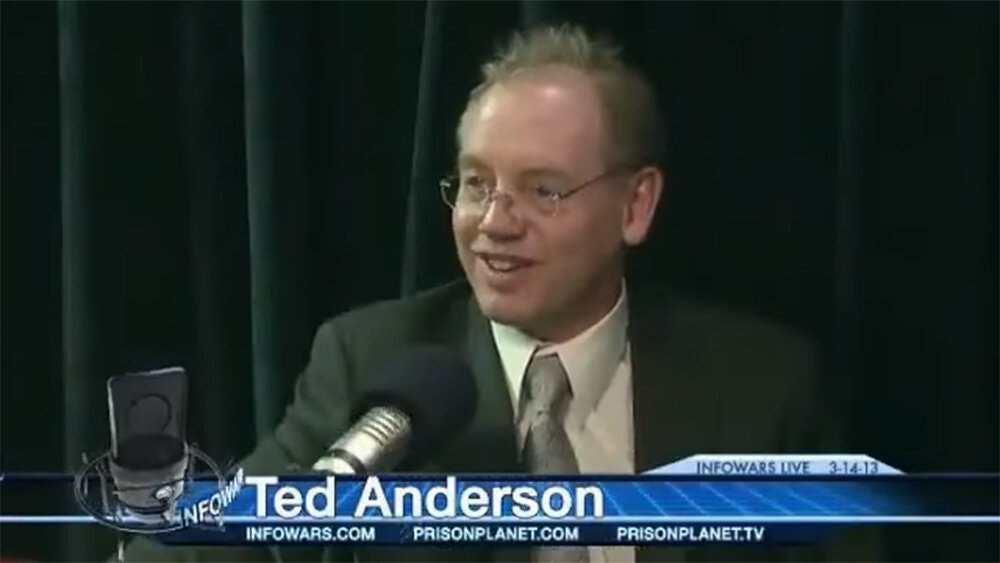 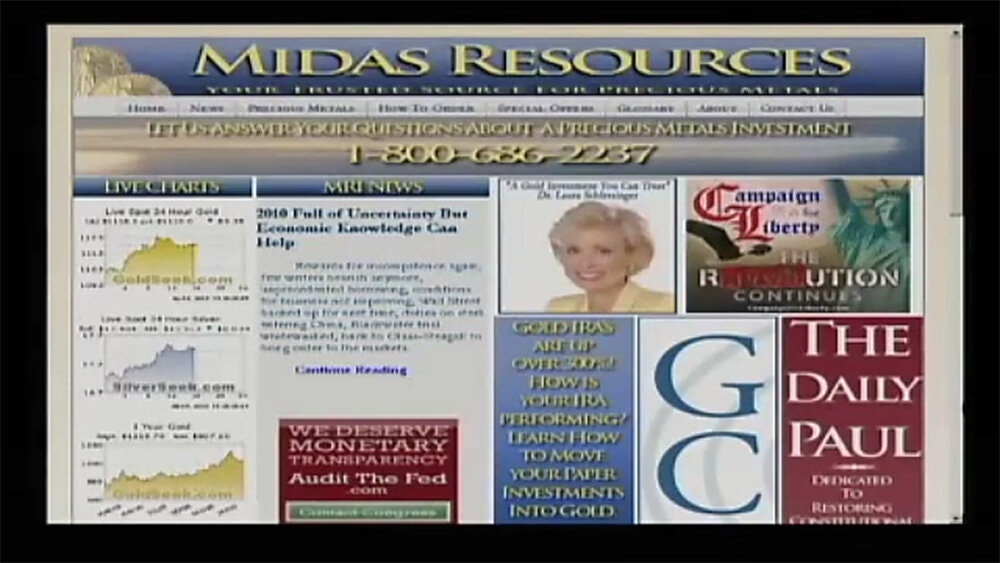 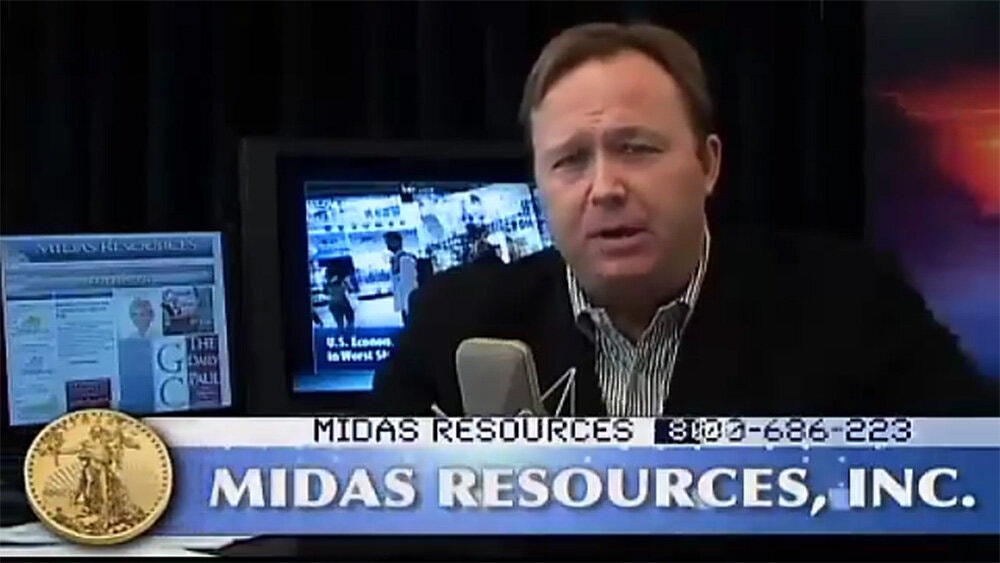 Archived footage shows Mr. Jones, pugnacious and prone to pontificating, broadcasting dire claims about the dollar’s inevitable demise before introducing Mr. Anderson, bespectacled and generally mild, to deliver extended pitches for safe haven metals like gold. Sometimes, Mr. Jones would interrupt the pitches with rants, like the time in 2013 when he cut off Mr. Anderson more than 20 times in 30 seconds to yell “racist.”

Genesis’s roster has also included a gay comedian; a former lawyer for the A.C.L.U.; the Hollywood actor Stephen Baldwin; the long-running call-in psychologist Dr. Joy Browne; a home improvement expert known as the “Cajun Contractor”; and a group of self-described “normal guys with normal views” talking about sports.

But eventually, the network developed a reputation for a certain type of programming, promoting its “conspiracy” content on its website and telling the MinnPost in 2011 that its advertisers “specialize in preparedness and survival.”

Several shows were headed by firearms aficionados. There was a Christian rocker who opposed gay rights and a politician who embraced unfounded theories about crisis actors and President Obama’s nationality. One program promoted lessons on how to “store food, learn the importance of precious metals, or even survive a gunfight.” Jason Lewis, a Republican politician in Minnesota who faced blowback during the 2018 election season after his misogynistic on-air remarks resurfaced, had a syndication deal with Genesis and a campaign office at Genesis’ address.

The ties between Mr. Jones and Genesis began loosening about a decade ago, when Mr. Jones reached a deal to have Genesis handle only about one-third of his syndication deals. Now, about 30 stations include Mr. Jones on their schedules, according to a review by Dan Friesen, one of the hosts of the podcast Knowledge Fight, which he and a friend created to analyze and chronicle Mr. Jones’s career. Of those, more than a third relegated him to late night and early morning. Several stations replaced Mr. Jones with conservative hosts such as Sean Hannity or Dan Bongino.

Mr. Jones’s relationship to Mr. Anderson continued to dim after 2015, when the Minnesota Commerce Department shut down Midas. The agency described Midas and Mr. Anderson as “incompetent” and ordered the company to pay restitution to customers after having “regularly misappropriated money.”

Now, the Midas website redirects to a multilevel marketing company selling the same supplements that populate Genesis’ online shop. The founder of the supplement company has a show syndicated by Genesis and has also appeared on Mr. Jones’s show.

But Mr. Jones has his own business hawking Infowars-branded supplements, as well as products such as Infowars masks alongside bumper stickers declaring Covid-19 to be a hoax. One of his lawyers estimated that the conspiracy theorist generated $56 million in revenue last year.

“The inability to have that sort of symbiotic connection between the gold sales on the radio affiliates really hurt their connectedness,” Mr. Friesen said of Mr. Jones and his former benefactor. “At that point, Alex had a bit more of a need to diversify how he was funding things, and Ted took kind of a back seat.”

But in 2018, the families of several Sandy Hook victims sued Mr. Jones and named Genesis as a defendant as well. The families’ lawyers cited Mr. Anderson’s frequent appearances on Mr. Jones’s shows and said that Genesis’ distribution of Mr. Jones helped his falsehoods reach “hundreds of thousands, if not millions, of people.”

Mr. Jones, Genesis and other defendants “concoct elaborate and false paranoia-tinged conspiracy theories because it moves product and they make money,” the lawyers wrote.

After the lawsuits were filed, both Genesis and Mr. Jones were rejected for coverage of the liability claims by West Bend Mutual Insurance, which began working with Genesis in 2012, according to court documents. After being dropped as a defendant, Genesis has continued to solicit donations, saying online that its “freedom to speak is held in the balance.”

The litigation demonstrates the increasingly prominent role of lawsuits as a cudgel against those accused of spreading false and misleading information. In 2020, Fox News settled for millions of dollars with the parents of Seth Rich, a murdered Democratic aide, whose death was falsely linked by the network to an email leak ahead of the presidential election in 2016.

Smartmatic and Dominion sued Fox News and other conservative outlets and figures last year after the election technology companies were targeted by unsupported claims about voting fraud and are seeking billions of dollars in damages. When Smartmatic and Dominion were still threatening legal action, several of the outlets broadcast segments that tried to clarify or debunk conspiracy theories about the voting systems companies.

“It seems to be, for the first time in a long time, a very tangible route to actually holding people accountable for the harm they’re causing and the ways in which they’re profiting off that harm,” said Rachel E. Moran, a postdoctoral fellow at the Center for an Informed Public at the University of Washington.

Genesis told the court in a filing last year that it that it was merely accused of being “a distributor of radio programs — the radioland equivalent of the paperboy — not the author, not the publisher, not the broadcaster.” The filing argued that the company “does not have a brain; it does not have memory; it cannot form intent.”

Lawyers for the families responded that the network should be “treated in the same manner as a newspaper or the publisher of a book” with a high degree of awareness of “the hoax narrative that Genesis repeatedly broadcast to vast audiences, over multiple years.”