Massacres Test Whether Washington Can Move Beyond Paralysis

WASHINGTON — Days after 19 children and two teachers were gunned down in Texas, politicians in Washington are tinkering around the edges of America’s gun laws.

A bipartisan group of senators is scheduled to hold virtual meetings early next week and has some proposals on the table: the expansion of background checks, legal changes to prevent the mentally ill and teenagers from getting guns, and new rules for gun trafficking.

Senator Christopher S. Murphy, Democrat of Connecticut and the leader of the effort, said he had not seen so much willingness to talk since 20 children were murdered at Sandy Hook Elementary School in Newtown, Conn., in 2012.

More far-reaching efforts — such as banning military-style weapons, raising the age for gun purchases and requiring licensing and registration for firearm ownership — have already been all but ruled out, the result of Republican opposition, Democratic resignation and court rulings.

This month, before the Texas shooting and another massacre at a grocery story in Buffalo, N.Y., a federal appeals court struck down a California law that banned the sale of some semiautomatic weapons to people under 21. Both shootings were committed by 18-year-olds.

The reaction in Washington to the horrific scenes is a familiar combination of pain and paralysis. There is a sense in Congress, at the White House and around the country that it should, somehow, be different this time.

In Uvalde, anguished parents grew angrier on Friday as a top state law enforcement official acknowledged that the police were wrong to have waited more than an hour to confront the gunman as he holed up inside a classroom, firing sporadically while students who were still alive lay still among the bodies of classmates. Hundreds of protesters raged outside the National Rifle Association’s convention in Houston — less than 300 miles from the massacre — where the group was celebrating its longstanding partnership with Republicans to block gun control measures.

“How Many More Kids?” read one sign. “You Are Responsible,” read another, painted to look as if it were splattered in blood.

And yet, even in the wake of the slaughter of so many children, Washington’s leading political players are reprising their usual roles.

From Opinion: The Texas School Shooting

Commentary from Times Opinion on the massacre at an elementary school in Uvalde, Texas.

“There is more Republican interest and involvement today than any time since Sandy Hook,” Mr. Murphy said. “So by definition, that’s different, right? But I also have failed every single time. Almost without exception, these talks, when they start, don’t go anywhere, right? And so I worry about claiming optimism, given that history.”

As the United States entered a holiday weekend on the heels of the two mass shootings, senators headed home for recess. President Biden is set to go to Uvalde on Sunday to once again console a community in the wake of unthinkable losses.

What remains is an enormous gap between the scale of the problem — over 1,500 people have been killed in more than 270 mass shootings since 2009, according to Everytown for Gun Safety — and what America’s political leaders can agree are the right responses to the carnage.

Polling suggests that many Americans are eager for a broader reset.

Nearly 90 percent of adults in the United States support the idea of doing more to keep guns out of the hands of mentally ill people, according to a Pew Research Center survey last year. And about 80 percent of people say gun purchasers should be subject to background checks, even when they buy their guns in a private sale or at a gun show.

But surveys also reflect the deepening polarization in the country, where about 30 percent of adults say they own a gun.

At the federal level, 51 percent of Americans favor a nationwide ban on the sale of AR-15 rifles and similar semiautomatic weapons, while 32 percent are opposed, according to a poll this month by The Associated Press and NORC. Three-quarters of Democrats were supportive, compared with barely a quarter of Republicans.

And the divide is also wide between people who own guns and people who do not. (Republicans are roughly twice as likely to say they own a gun as Democrats.)

A sizable majority of people who do not own guns favor banning high-capacity ammunition magazines and creating a federal database to track all gun sales, according to Pew. Fewer than half of gun owners support the same restrictions. By contrast, large majorities of gun owners favor arming teachers in schools and allowing people to carry concealed weapons in more places — changes that are broadly opposed by people who do not own firearms.

The response to mass shootings in the United States is starkly different from the decisive action taken in other developed countries around the world. Britain banned semiautomatic weapons and handguns after shootings in 1987 and 1996. Australia held a mandatory gun buyback after a 1996 massacre and the rate of mass shootings plummeted. Canada, Germany, New Zealand and Norway all tightened gun laws after horrific crimes.

For Republican lawmakers in the United States, even a national tragedy like the two recent mass shootings may not be enough to break through the fear of angering their supporters, who have been fired up over the last several years by former President Donald J. Trump, Fox News and social media.

Since 2017, when Mr. Trump became president, support for banning assault weapons among gun owners, for example, has dropped to 37 percent from 48 percent, according to Pew.

The pressure that Republican elected officials feel to toe the line among their gun-supporting constituents was evident within hours of the grisly news in Texas. A steady stream of Republican lawmakers once again delivered a two-step that has worked for them for years: declaring that none of the measures Democrats favor would have stopped the gunman — even as they steadfastly oppose broader efforts that might.

Republicans have used the delayed police response to the Texas shooting as a way of shifting the debate to school security rather than guns, which have surpassed motor vehicle accidents as the leading cause of death for American children ages 1 to 19, according to data from the Centers for Disease Control and Prevention.

In a video that quickly went viral, Senator Ted Cruz, Republican of Texas, focused blame on “some violent psychopath” when he was questioned by a British reporter in Uvalde.

“If you want to stop violent crime, the proposals the Democrats have, none of them would have stopped this,” Mr. Cruz said. And in Washington, he faulted Democrats and the news media for rushing to “try to restrict the constitutional rights of law-abiding citizens.”

That rigidity by most Republicans for the past decade has contributed to a sense of gloomy inevitability among Democrats in Congress and at the White House. In remarks the day after the Texas shooting, Senator Chuck Schumer of New York, the majority leader, said he accepted “the fact” that Republicans are unwilling to prevent more killings.

Describing his hope for finding a compromise, he said: “Maybe, maybe, maybe. Unlikely. Burnt in the past.” 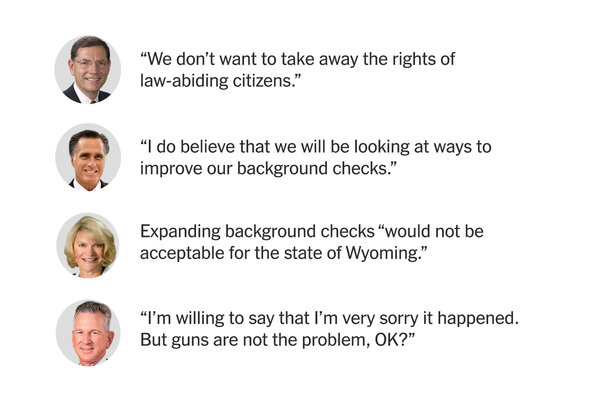 See what the senators said when asked whether they would support a pair of gun control bills to strengthen background checks.

Mr. Murphy said he spoke to members of Mr. Biden’s White House staff on Friday, who told him the president was eager to do anything he could to support the nascent negotiations over new gun safety measures.

“He can’t be hands off and he won’t be hands off,” Mr. Murphy predicted, adding, “I think you’ll see him being actively involved over the weekend and into next week.”

But the president and his aides remain wary. There is little appetite for Mr. Biden to pledge action that he knows will fail, setting himself up to look politically impotent. Aides also have cautioned that too much involvement by the president could further politicize the debate, making it harder for Republicans and Democrats on Capitol Hill to reach consensus. And forcing moderate Democrats to take a symbolic, tough-on-guns stand could cost the party even more seats in the midterm elections this fall.

On Saturday, though, Vice President Kamala Harris called for a ban on assault weapons, a proposal that is widely supported by Democrats but is highly unlikely to pass the evenly divided Senate.

“An assault weapon is a weapon of war with no place, no place in a civil society,” she told reporters after attending the funeral of one of the victims of the Buffalo shooting.

White House officials say it is clear to voters and lawmakers alike that Mr. Biden supports aggressive action on gun safety measures and that Republicans do not. “This isn’t a case of Republicans hiding their position,” Mr. Schumer said on the Senate floor.

Now, White House aides say, it is long past time for the other party to get behind those proposals.

But some activists have run out of patience with that explanation. They say Mr. Biden could — and must — be doing more.

“In your recent address to the nation over the tragedy in Uvalde, Texas, you posed the question, ‘Where in God’s name is our backbone?’” Keri Rodrigues, the president of the National Parents Union, a group that advocates on behalf of children and families, wrote in a letter to Mr. Biden on Friday. “We now pose this question back to you as the leader of this nation.”

Ms. Rodrigues called on Mr. Biden to take executive actions to make guns less accessible, such as changing the way gun sellers are defined so that more of them would be required to conduct background checks. And she urged him to convince Senate Democrats to set aside the filibuster in order to ban assault weapons, raise the age limit for buying guns and vastly expand the federal background check system.

Mr. Volsky said he was deeply disappointed in what he called a lack of urgency by Mr. Biden after the shootings in Buffalo and Uvalde.

“They have this learned behavior that after tragedies like this one, you say all the right things,” he said of Democrats. “And when all of that fails, you throw your arms up and you blame the Republicans. It’s absolutely pathetic.”

Mr. Murphy is not exactly optimistic, but he is more hopeful.

He said that taking some small steps with Republicans could accelerate the decades-long effort to pass new gun safety measures by demonstrating slow but important progress, much the way gay rights and civil rights activists won minor victories before they won big ones.

Mr. Murphy said Republicans needed to see proof that they could vote for new gun restrictions and not be punished by voters. Outrage over the deaths in Buffalo and Uvalde could provide Republicans with a chance to test that theory, he said.

“The story here could be that Congress is discussing a set of measures that are much less than what is necessary to save the maximum number of lives,” Mr. Murphy conceded. “But I also have another story, which is, we’ve done nothing for 30 years, and if we were to do something that was significant and that demonstrably moved the needle on our gun laws, it would be historic.”